Due to the Corona pandemic, we have some information about price updates. You can read about it in this newsletter. 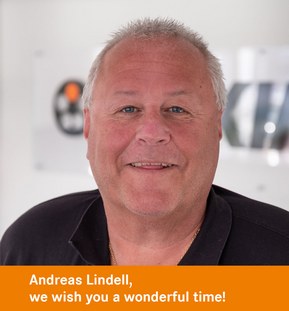 ANDREAS LINDELL, WE WISH YOU A WONDERFUL TIME!

A happy and fun-loving person with passion for sales.
Andreas was born in Stockholm, grew up in Gothenburg and Skåne and lives in Lund. He have two wonderful daughters, Rebecca and Michaela, and 3 lovely grandchildren, Ludvig, Alice and Tuva.

Andreas Lindell is a happy and fun-loving person with long experience in sales and with solid knowledge of marking and labelling. Andreas´ passion for his profession has given him and Fleximark great successes.

Andreas was employed as an operator but only a year after he started with indoor sales. Fleximark´s turnover at that time was around 200k euro and the company had only 5 employees.
In 1992, Miltronic Scandinavia acquired Fleximark and Andreas began to work with outdoor sales.  When Fleximark in 1996 was moved from Malmö to Nyköping, Andreas remained in Lund as Fleximark´s outdoor sales representative. 80% of the customer stock was from district in south of Sweden, Andreas started to process these customers and then expanded his territory northward.
As Sweden is a long country Andreas started to create relations with wholesales who helped him with marketing and sales of marking & labelling products. The result was successful, Fleximark started to grow.

What has been most exciting about your work?
“I like to compete! Work with sales is similar to a game or competition from start to end. You want to win and do it in a good and fair way. It´s important to always be in the better part of the list because you will also face adversity” says Andreas.

Andreas also loves to meet people and create relations. Many of his customers during the years have after a long relationship become his friends. “Getting to know your customers and creating relationships is the future” he says.

Best with Fleximark?
Andreas believe that freedom under responsibility is the key. Products are probably secondary, for him it is more important with relations. Andreas have had a lot of fun with Fleximark. He remember all the trips across Europe to meet and train LAPP people in marking & labelling. He also remember other memorable events like one special trip to LAPP China in Shanghai, the Hannover fairs between 1989-2012 and also all Swedish ELFACK fairs.

Andreas has been involved in many large and important installation projects over the years, like for example Malmö City tunnel, Emporia shopping center, Sturup Airport, the Turning Torso building, Liseberg amusement park, Arlanda Airport, Malmö Live center & hotel and one of Sweden´s largest schools located in Lund. Other big projects that he will never forget is when Fleximark was commissioned to deliver all the labelling to the big Öresund Bridge between Malmö and Kopenhagen and also one of the last, the big ESS (European Spallation Source) project in Lund, Sweden. The Challenge has been to find and get projects that will be remembered, he says.

Fun things about Andreas
One fun situation Andreas carries with him among the sales trips he has made was one trip from Lund to Kiruna. It was an early spring day (Sunday). Andreas was flying to Kiruna for a customer visit on Monday morning.  Before he left he cut the grass home in Lund, it was warm and sunny so he thought it was a bright idea to travel in shorts and only a thin sweater.  When he arrived in Kiruna in the evening there was snowstorm! The climate difference between southern and northern Sweden was clearly reminded.

Andreas also loves ball sports, especially football (Arsenal is the favorite team) and handball and he carries the talent of being able to talk like Donald Duck!

What dreams do you have?
Andreas thinks it feels a bit surreal and scary to take the step out but says it will be great to be able to do things you can and want while you are healthy and mobile. Andreas will move from Lund to Kävlinge, change house to an apartment. He want to be closer to his daughters and grandchildren. Andreas has also bought an apartment in Fuengirola, Spain and will spend a lot of time there so LAPP Spain, just give him a call :) “Spain has great opportunities to play golf so I will start playing and take the green card” says Andreas. He looks forward to what he has in front of him.

We really wish our co-worker a fantastic time! As Andreas himself would say.. “Ad Finem” (lat. To the End)!

IMPORTANT INFORMATION FLEXIMARK DUE TO COVID-19.

Fleximark summer holidays are over and we are back in full force with new energy. All employees are healthy at the moment and we will work to ensure that this remains the case. It feels good to have everyone gathered again.

Fleximark has strengthened the organization with a new work colleague and we also have a colleague back from parental leave. We are well equipped to provide our customers and partners with the best service and with high delivery security.

Summer and vacation, wonderful of course! But despite the summer time, many installations are in progress and the material supply is important. We make sure you get the marking system products you need when you need them. Our customer service, production and delivery are open all summer, Monday to Friday 08.00-16.00.

Fleximark keeps production and sales open. Our sales people work from home and have the phone, e-mail and Microsoft Teams activated for business contact. We make sure that labeling for safe installations continues to be delivered and we support you in the questions you have regarding labeling.

Meetings in the Corona Times? Yes, but online!

Book a meeting with one of our vendors and you will recieve an invitation through Teams for an online meeting. We can also send product samples in advance for the best experience.

In these times of social distance, alternative modes of communication are very important. Fleximark provides telecom installers with important markings when maintaining mobile masts. We keep our distance by contacting our customers via telephone and Microsoft Teams for online meetings.

For Fleximark AB, the health of our employees and deliveries to you as a customer is of the highest priority.

We are gradually introducing measures in our operations as a result of Covid-19, which means changes in our working methods, but which also includes ensuring customer service, customer order management, production and deliveries. Our customer service will help you answer the questions that appear in connection with your order.

the health of our customers and employees is our top priority. All measures are taken to maintain our range of services in the best possible way for you, despite current developments. We take the recommendations and advice of the Federal Ministry of Health very seriously and follow them closely. To protect our employees, we constantly adapt our safety precautions.

Transparency is important to us. That is why you will find all important information and details at a glance here. Please pay attention to the time of the update.

Our decentralized logistics processes have so far made it possible to react to the restrictions in trade and logistics and make immediate adjustments. In addition, our current multi-sourcing and purchasing strategy helps to minimize supply bottlenecks. For this reason, we currently expect only minor delays in delivery.  If you want to track a local shipment, you can use our Track & Trace [AF2] function.

Orders can be placed in the usual ways. Use our LAPP e-Shop and e-Services, for example, to directly view availabilities and delivery times or to manage your documents.


Internal measures to prevent the spread of COVID-19 infections

A central task force, made up of international LAPP staff, is intensively engaged in the topic of COVID-19 and in constant exchange with health authorities and LAPP branches. All relevant information and advice is immediately translated into measures and communicated to all employees.

The following security measures have been taken so far:

We are committed to protecting the health of our employees and customers and thank you in advance for your understanding for any delays or inconvenience caused by COVID-19.
On behalf of the entire company, we hope that everyone will come through this situation healthy and unharmed. We will inform you as soon as there is any news on the current situation.